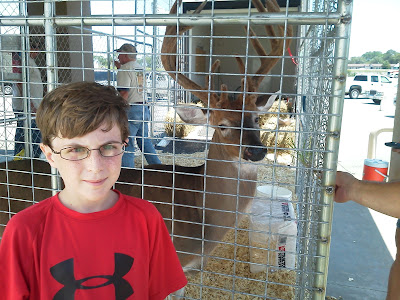 After soccer practice on Saturday, my Dad and I took Reid to meet Rufus.  Rufus is a ten year old monster buck that has been raised by a family since the day his was born.  I really do not know the back story on how the family got him, but he has been well taken care for and seems to have a pretty good life.  He is used to promote wildlife education and conservation at outdoor shows and what not.  Saturday, he was on display at Adel Outfitters, so we made the hour trip to check him out and do a little shopping in preparation for hunting season. 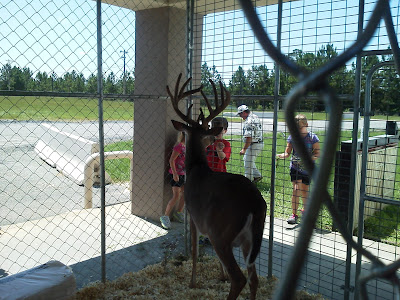 ﻿
As you can see, Rufus is doing pretty well in his old age.  He does very well around kids and lets them feed and pet him.  Reid gave him some green grass that was growing next to the building. 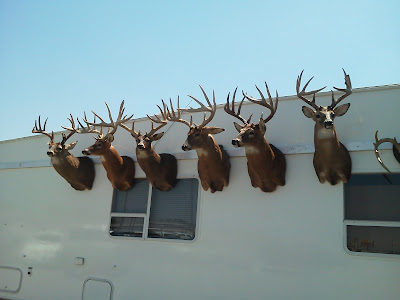 Here is the impressive picture.  These are Rufus's sheds mounted on other deer for all to see the difference as a deer ages.  He is a great deer at age 4 (first deer on right), but look at what he gets to at age 6 and 7 (move right to left).  A true monster!!  He starts going down hill a little at 8 and 9 and is even smaller this year at the ripe old age of ten.  It was pretty cool to see and we had a great day.

I know I have said before that I think it is great to manage your property for trophy deer, but I have to admit that I would have shot ole' Rufus when he was only a young lad at age 4!!
Posted by Unknown at 3:54 PM 3 comments: 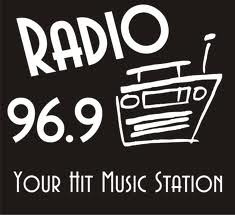 For as long as I can remember, my little hometown had the privilege of listening to two local radio stations.  The first station, located in Fitzgerald had the call letters WBHB and was an AM station that carried local news, sports and weather.  WSIZ was located just outside of neighboring Ocilla and carried much the same.  WBHB carried the Fitzgerald Purple Hurricanes football, basketball, wrestling, and baseball action, while WSIZ carried sports for the Irwin County Indians.  It really didn't seem like competition between the two stations because everyone just listened to both. 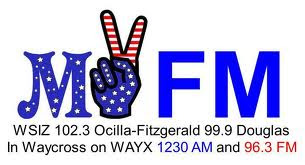 A lot has changed over the years and they have also stayed the same.  No longer are they small AM stations, they have moved over to FM signals.  WBHB has been replaced with the call letters WRDO, but they still carry Fitzgerald High School sports.  WSIZ has risen from the dead after being non-existent for many years and now have a very popular classic rock station that still plays Irwin County High School sports as well as Georgia Southern Football on Saturdays in the fall.

My childhood is filled with memories of the local radio stations. One voice that will always be a part of my life was Mr. Charlie Ridgeway.  Charlie did the local sports and would give all of the stats for the local recreation league games.  Imagine my excitement as a young boy when I would sit in front of the radio before school to hear Mr. Charlie say, "and leading the Cubs at the plate was number 7 Trey Luckie going 3 for 4 and helping his team defeat the Reds in last night's action."  I can promise you that every kid in town was sitting there listening for Mr. Charlie to call their name.  Just a great part of small town living.  Mr. Charlie worked for both stations through the years and called all of my High School baseball games.  We became good friends and I was glad to have him as a part of my life.  If you want to read something interesting, Google "Charlie Ridgeway baseball" and see how Charlie made history.  A real hometown hero!!

Another voice that I will always remember belongs to Howard Jordan.  Howard, in his younger days worked for the radio station and hosted a show called "The Exchange".  This show allowed people to call in and offer items for sale or trade and left their phone number and contact information.  Kind of like an on air yard sale.  People listened not only for deals, but because this show was side splittin' funny.  Howard has a great since of humor and would often get very tickled at the items that people would offer.  A great deal of air time included Howard making jokes about the chicken that was just offered for a trade on a good used weed eater.  Small town, what can you say!!  Howard left radio a number of years ago to find a real job and recently retired from said real job.  He is back on the air at WRDO as half of a morning show team that also includes another local radio veteran, Mickey.  Mick and Howard in the Mornings is extremely popular and keeps Fitzgerald on their toes because you never know who they are going to talk about.  Their biggest fan includes my 6 year old daughter who calls in to the show often to talk to Mr. Howard and she has even been a studio guest and given air time.  Making memories!!

As a member of the local banking community, I get the privilege of working with both radio stations with the bank's advertising.  I consider Fitzgerald and Ocilla very lucky to have two thriving stations that work well together and compliment each other so well.  They both have a morning show with great host and they both still do a lot for the community.  They are always supporting our hometown and they are always willing to give time on the air to promote charitable causes.  I'm just glad that they are still around helping to bring a little cheer to the good folks of my hometown.  I was standing in line the other morning at a local breakfast stop when a little older gentleman leaned over to me and said...        "That Howard and Mick sure are something ain't they?"

Making memories!!  Thanks Mick, Howard, Kim and Danny!!
Posted by Unknown at 8:36 AM 2 comments:

Yep! I went to school for this!

I was recently asked by the "powers that be" if I would help with some of the marketing efforts at the bank that I work for.  I have handled the marketing duties for my bank's location for a number of years, but this was the first time that I have been asked to take on the duties of marketing for the entire bank.  I was asked to put my college degree to work and come up with a new commercial that would be suitable for all of our bank's locations.

They wanted something that was fun and up beat.  With that in mind, I chose to hitch my wagon to the one thing that everyone in all of our markets love---- High School Football!

This is what we got!!

I will be available for autographs at the Fitzgerald Wal-mart on August 8th from 2:00am to 4:00am!

Now wouldn't you want to come bank with me after seeing that?? :)
Posted by Unknown at 7:18 PM 6 comments: