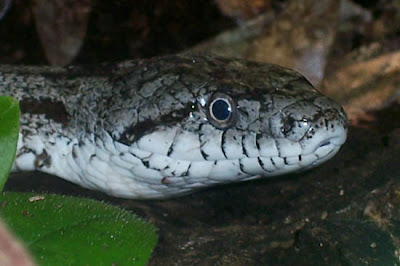 This little guy wouldn't hurt anybody!  Unless you are talking about my wife's feelings.  This is a gray rat snake, or what most people in these parts call an Oak Snake.  They are harmless to humans and feed on small rodents.  They range in size from 6 inches to about three feet.  They are actually good to have hanging around in your yard.  They keep mice away.  They are not good "in" your house as I discovered Monday night.
This weekend kicked off the college football season.  The big game of the weekend came on Monday night between Boise State and Virginia Tech.  Being the rather large college football fan that I am, I made plans to watch the game with my good friend and neighbor down the street.  My plans were to watch the first half and then head on home.  I was home much sooner than that!
I received the distress call in the middle of the first quarter!  I could see the house phone on my caller ID and I figured it was just the wife telling me that the kids were in bed and everything was just fine and to really enjoy myself while I hung out with my friends. (come to think of it, that never happens)  What I got on the other end of my phone line was a very polite, Get Home NOW!  There is a snake in the kitchen!!  I told my buddy, let's go and headed out the door.
Upon arrival I was surprised to find my wife still in one piece.  She actually held up pretty good.  She informed me that our little critter was under the stove and that he was about two feet long.  When I finally got the stove pulled out and found our little house guest, I was surprised again to find that he was only about 8 inches long.  Just a baby.  "Maybe I misjudged his size",  said the wife.  Now normally I let these little guys go about there own business when I find them in the yard, but this little guy had crossed the line.  He was no longer on his own turf.  He had invaded my space and the wife would have moved out if he was not dealt with properly.  Sadly, he had to die to maintain order in the household.
I discarded the little fellow in the woods in the back.  As my buddy and I were heading out the door to finish watching the game, the wife calmly informed me that I had just walked under another snake that was climbing up the bricks on the chimney.  It was the first ones twin brother.  At this point I was tired of dealing with this and missing my game, so he had to die too.  It was an eventful evening and one in which I don't think my wife slept very much.
I like snakes.  I see them in the yard all the time and move them out of harms way all the time, but snakes please take note.  You are not allowed past the lines of the flower beds.  If you do, I will be forced to deal with you.  Especially if the wife is around at the same time you are!!
Until next time, happy mouse hunting!!!
Posted by Unknown at 12:24 PM

Must be cousins to one in my yard the other day but he was really about 2 feet!

There's not many snakes around were I live. But if you take a drive about 100 miles north to our foothills you can almost always spot a rattlesnake or two. There not very friendly critters so we usually try to stay clear of them.

I'm not much of a sports fan but I do like to watch a few of the College football games. Two of my daughters and their husbands all graduated from Ole Miss. and I try to watch their games. They got beat bad last week by South Carolina and I think my son-in-laws are still crying.

Have a great week and God bless you

sometimes it ain't easy getting old :-)

I have the same rule...inside the house or living under my deck then critters don't "pass go"....great read!

Thank god I live in relatively snake free Maine, however I do have a garter snake that is just over a foot long that shows up in May. It will scare the crap out of me and then I just let it do it's work, but other than that I'd rather not be around them. Nice post.