I said good-bye tonight to a very important person in my life.  It was a nice reception in which the City of Fitzgerald honored its recently retired City Administrator.  Henry Tyson faithfully served as a public servant for the past 17 years.  He was a leader among his community and Fitzgerald is a better place because of him.  However, this is not the reason that I hold Henry Tyson in a special place in my heart.  Before Henry became a public servant, he was my Youth pastor at First Baptist Church and helped shape me into the man that I am today.

Henry, his wife and two daughters moved to Fitzgerald in 1981.  I was nine years old when Henry became youth leader and Minister of Music at First Baptist.  He was a young man at that time and brought tremendous energy to the position﻿.  You could often spot Henry chasing squirrels across the FBC campus as he made his way from his office to the sanctuary to work on some new music.  His attitude and enthusiasm was contagious.  So was his love for the Lord and his willingness to minister to those in his new home town as well as to those all over the country.  He wanted you to be a part of our church and the things that we were doing and he wasn't afraid to let you know that.  On Tuesday nights he would load up a group of young people and go knocking on doors of folks who had been visiting the church.  I can tell you that people are shocked when you show up at their house unannounced with a bus load of teenagers, but it got the job done.  Our church grew with Henry Tyson there.

The youth of First Baptist Church loved Henry Tyson!  There was never a trip that Henry would not make with a bus load of teenagers, no matter the destination.  I have been all up and down the East Coast with Henry serving the Lord through missions, while also having the times of my life!  The annual Youth Mission trip was a two week affair.  We worked the first week and played the next.  Our work consisted of performing concerts and encouraging the start up of new churches.  Our play included trips to The Statue of Liberty, The Baseball Hall of Fame, The Liberty Bell, Washington, DC (including one 4th of July firework show at the Washington Monument), and Banner Elk North Carolina where I have been mountain climbing, hiking, rafting, caving, repelling, and snow skiing with the guys at Edge of the World Outfitters. I have so many great memories of my day's in Henry's youth group that I cannot begin to count them all.

Henry gave me my voice.  I sang in church as a young child, but as most young teenage jocks tend to do, I ventured away from my singing.  Henry wouldn't allow it.  He was always there encouraging me to use the talents that God had given me.  He was constantly putting me in a position to challenge my vocal limits by giving me solos in the church's biggest productions.  I was just a kid, but Henry made me feel like one of the Three Tenors!  He would never let me doubt my voice.  Henry left our church as I was leaving for college to help start a church of his own, so he has not gotten to hear me sing and mature as a vocalist over the past several years.  Today I sing for the Lord and my church, but a part of me will always sing for Henry. I am so glad that he got to hear me sing just recently at a friend's funeral.  The last time I will sing before he leaves town.

I said good-bye to Henry tonight.  His life has brought him full circle as he returns home to take care of the family farm and his aging parents in North Georgia.  I owe him so much and feel that I never had the opportunity to make him fully aware of how much he meant to me.  He was there with me the day my sister died and he preached her funeral.  I can still hear his voice as he was telling us that he imagined her conversation with Jesus was one of concern for us, but "could she go and try out her new wings?"  It was a fitting tribute to a magical little girl and just another gift that Henry gave to me and my family.  Something that I will never forget!

Though it's hard to let you go
In the Father's hands we know
That a lifetime's not too long to live as Friends!

God speed Henry!  I will miss you! 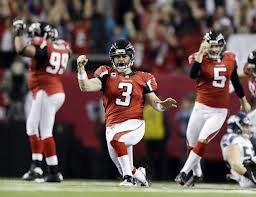 The picture above shows Matt Bryant, kicker for the Atlanta Falcons, celebrating his game winning field goal against the Seattle Sea Hawks in the 2013 divisional playoffs.  This kick was reason to celebrate as the Falcons gained enough yards in the final 30 seconds of the game to have the opportunity for this kick to be attempted.  The kick was good from 49 yards and all but sealed the 30-28 victory with only 8 seconds left in the game.  I can understand the high fiveing and sideline dancing in this case.﻿  The rest of the game...not so much!

I am not the biggest Pro football fan.  I did participate in a fantasy league this year and follow the Falcons just enough to know who is on the team and how they did each week, but for the most part I mainly stay focused on college football.  I was reminded why as I watched the Falcons in their play-off game on Sunday.  The Falcons took an early lead and looked great going into half time with 20-0 advantage.  You would think I would have been happy as the team from my home state seemed to be doing pretty well, but I was upset because my son was watching this game with me and no child should have to watch grown men act this way.  Catch a pass...do a little dance.  Get tackled...get up and jaw with the tackler.  Get burnt on a long pass...laugh about it a do a little clap.  Score a touchdown...do a choreographed touchdown dance.  Get shown on the sideline...flash a money pose.  Who are these people????

I'm sure there are still players out there who possess these qualities, but they are becoming fewer and farther in between.  Why would I want my kid to watch a NFL game?  What kind of example is being set by these "all about me and my money" athletes of today?  Not a good one I'm afraid!

I watched the Falcons loose a 27-7 4th quarter lead.  As the Sea Hawks were driving down the field for their 3rd consecutive score, a defensive back for the Falcons was able to deflect a slightly under thrown ball and helped the ball fall incomplete.  He danced.  I told my son that he should get his butt back in the defensive huddle and worry about the next play, not show off like he did.  I reminded Reid that football is a team sport and no one man is the hero.  I also told him that it was foolish for a player to be dancing after one play while the team has been getting the stuffing beat out of them the entire 2nd half and that particular player had missed numerous tackles.  It was embarrassing!  What happened after the dance??  The Sea Hawks went on to score a go ahead touchdown with 30 seconds left.  Who was dancing then??

The Falcons "rose up" and made two great plays to get into field goal range for the game winning kick, but I was not dancing....

I'll leave that up to the show boats that play in the NFL!
Posted by Unknown at 10:05 AM 3 comments:

Stranger in the Attic 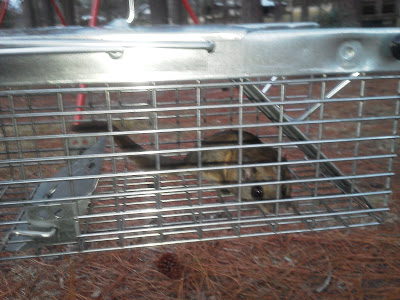 See this little guy?  He has been causing me a lot of grief for the past month or so.  There is nothing quite like to sound of pecans being rolled around in your ceiling or on your attic floor at 4:00 in the morning, but that is just how these little flying squirrels roll.  I knew I had a problem when I was unloading all of our Christmas decorations.  Every box seemed to have a pecan in it.  Keep in mind that I have no pecan trees in my yard and the closest one is down the street.  I then heard the first signs of trouble one evening while putting Reid's clothes in his closet.  A faint scratching was coming from the ceiling.  I went up to my daughter's room and opened the attic door found in her closet.  As I shined my flashlight, this little guy peaked his head around the corner﻿, smiled at me and was gone in a flash.  The game was on!

I guess I was hoping that by taking all of his pecan stash away in the Christmas boxes that he would find another place to dwell.  I was wrong.  He worked harder to replenish his bounty and drove us nuts crazy rolling his pecans all over the house.  This was getting personal and this little squirrel's life was coming dangerously close to ending!

I decided to go the humane route and bought a live trap.  I spent some time in one of my four attics (crazy house design) and found the pathway that my little pecan hording buddy was using to stash his stash.  I set the trap up with some pecan hearts as bait.  I slept well and did not wake to the scurrying of little feet chasing nuts.  As I approached the attic door, I could hear the metal doors of the trap as our little friend was bouncing back and forth looking for an opening.  He didn't find one!

I have read that you need to take a flying squirrel at least 5 miles from your home if you intend to release him.  If you do not go five miles, chances are he will come back.  I took my little buddy ten!  I let him go in a nice little park in downtown Ocilla, GA where he raced up a 100 year old pine and stopped to look at me one last time as if to say "It's been real".

I have also read that where there is one flying squirrel, there is more than likely several more.  I will set the trap again when I get home and hope for a repeat performance until I get rid of these little suckers.

Update:  As of Wednesday morning, I am now two for two on squirrel catching!  The battle continues!!
Posted by Unknown at 8:04 AM 5 comments: 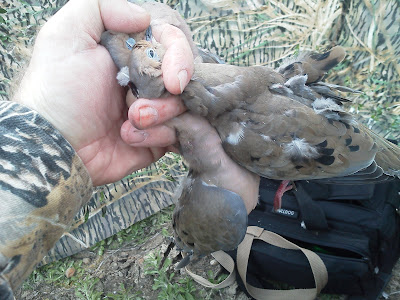 This year's dove season came to an end in fine fashion with both a morning and afternoon shoot on the final Saturday.  We got into a birds on both shoots and had a great time fellow shipping with good friends and watching good dogs retrieve our tasty little grey feathered friends as they tumbled from the sky after a shot from my Browning shot gun.

I always hate to see the last day because it seems to end to quickly.  We have had a good year and Josey once again made me proud with her consistent field work.  I love to take her hunting because you can tell she loves it so much.  I will have to patiently wait for next season to come around in September and hope that my son will be ready to shoot his new shotgun at a few passing grey birds with me. 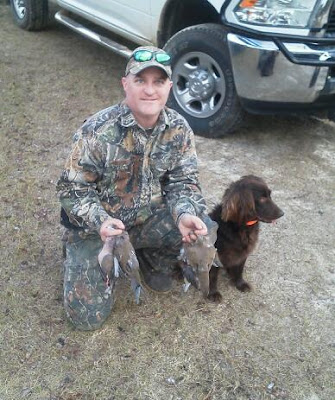 Bring on Turkey season!
Posted by Unknown at 8:04 AM 2 comments: