A spokesman from the corporate offices of Duckpower, Inc. has confirmed rumors of a possible impeachment.  It seems that many employees and one founding member of the company have become increasingly disgruntled at the leadership being displayed by the company’s President, Mr. Duckman.   There have long been accusations of abuse from the highest office, but loyal followers of the company, which have offices in Maine as well as in Georgia, have been encouraged to sweep those thoughts under the rug for the sake of the business.  The head of the Southern division was overheard saying that “the mental abuse and constant ridicule displayed by Mr. President towards his loyal employees are sure to bring an end to what some have said was a shaky union to begin with”.
It seems that the problems started with an unpaid corporate fishing sponsorship.  Mr. President, who apparently agreed to sponsor an employee’s bass tournament failed to fulfill his sponsorship obligations because the sponsored team did not technically “win” the tournament.  You can see the ESPN article here  where the employee is clearly heard thanking this supposed sponsorship.  Our sources say that the bill was never paid and tensions started to run a little high in the Southern Division.
There was also word that Mr. President was a little stingy with his allotment of last year’s Super bowl tickets that were given to him by his twin brother.  It seems that Mr. President harbors ill will towards his twin and would not allow any of his employees to support his brother’s team.  All Green Bay Packer gear has long been outlawed at company functions.
The Northern Division of the company can be considered even more unstable.  The relationship between Mr. President and his co-founder Mr. Duckhammer and the one simply known as Diesel, is a difficult one to explain to say the least.  It has been reported that on many occasions, Mr. President has abused his power, using it to his distinct advantage, in blatant attempts to elicit favors from his constituents. As proof of his debauchery, this ½ naked photo of Mr. President clearly depicts him staring lovingly at the cameraman, poor Vice President Diesel, in a vain attempt to seduce him with his powerful animal magnetism in order to solidify his honorable status.
This was of course only the beginning of Mr. President’s deviant behavior.  This additional file photo seems to show an unwanted fondling of an employees’ shoulder.  Sure it may seem innocent but trust me this could be a slippery slope that can only end in ruin. 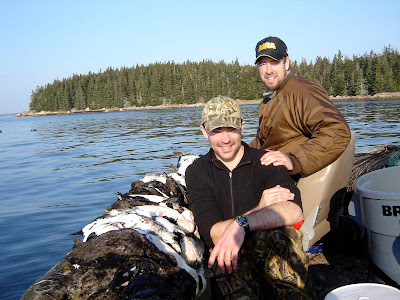 The company spokesman would not confirm or deny that the board was currently in session at time of print, and whether or not Mr. President was in attendance.  It does not look good for the sitting president of Duckpower, Inc., however, this reporter thinks that the company may just be better off in the long run.  Just take a look at this recently surfaced video that was buried deep in the company vaults.  You may recall that just recently Mr. President publicly called out a founding member of the company for lack of shooting skills and that founding member was subjected to ridicule in the duck hunting blog industry.  Parental guidance is suggested due to language not fit for a company President.
You may watch the video here!

Wow!  Nice shooting!!  Now you tell me.  Does this look like a man that should be leading others in a Duck Hunting company/blogging venture??  I think not.


Reporting for Hunting News Daily, I’m A Brave Eagle in the Rabid Outdoors!
**For those of you reading this post and wondering just what in the world is going on, don't worry!  I'm just having a little fun with the Duckman, who I consider a good friend, because he chose to have a little fun with me!  Consider this revenge Mr. President!  You the Man bud!!**

Shameful, absolutely shameful. It is troubling when one who had been so great takes the sorted path of self destruction. VIVA LA REVOLUTION!