So today is a new day for us Braves fans.  It had been two days now since the Braves finalized the 2nd largest September collapse in MLB history.  We knew we could never catch the Phillies for the division crown, but we had a lead in the wild card race of 8 1/2 games over the Cardinals.  We felt that we could match up well with the other division winners in a playoff series and then take our chances with the Phillies for a chance to go to the World Series.  Then September started.  We started playing some very bad baseball and our lead shrunk to scary levels.  We were still up 3 with 5 to play however so all hope was not lost.  Until we lost our last 5 games and were given permission to clean out the lockers.  So what happened?  Was our team that bad?  Was our Manager and idiot?  Are we cursed?  I don't think so.  I think we just had some bad luck.

Injuries to our top two pitchers did not help.  JJ and Hanson went down and our starting rotation was reduced to just pretty good instead of stellar.  Our $15 million dollar man named D. Lowe pitched like a $15 dollar man this year.  That hurt.  Our free agent 2nd baseman hit .180 for the first half of the year. (He was the team MVP in the second half often carrying the team on his back, but a few more hits in the first part of the season would have won us a few games)  Our Mr. Everything prospect and All-star rookie from the previous year, Jason Heyward, forgot how to play the game and batted a mere .220 with 14 home runs.  Our steady Eddie left fielder/3rd baseman, Martin Prado came back down to earth and had a bad year.  Our Silver Slugger catcher, Brian McCann decided to forget how to hit in the last month.  Chipper just keeps getting older even though he is still pretty effective at the plate when he can play.  Our new Manager made some mistakes, but he is not the one who has to hit, catch and throw the ball.  In short, we just did not play up to our potential.  If all of the guys just play to the numbers on the back of their baseball card, then we are a 95-100 game winner and look good going into the playoffs.  Just not meant to be this year I guess!

I could get lost in my misery but there is one thing that keeps me going.  The Red Sox lost a bigger September lead than the Braves.  They blew a 9 game lead in the wild card that allowed Tampa Bay into the playoffs on the last day of the season.  My good friend The Downeast Duckhunter, who happens to be a Sox fan, was reduced to pulling for the Yankees on the last day.  How bad is that????

So now the off season begins and the Braves have some work to do.  We all know what needs to happen but it is going to be hard to accomplish.  We have to move some unproductive players with higher salaries in order for us to get better.  It should be fun to watch! 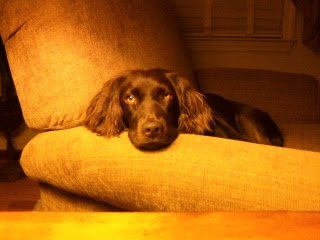 Isn't this where every good bird dog deserves a little rest??

I finally found time to finish up my most challenging project to date.  Joe brought me a table that was old as time and in terrible shape.  You can see some of the first pictures here.  I took this table completely apart and rebuilt it from the ground up.  It is now very steady and can be used as an everyday piece of furniture that can be enjoyed for the next 100 years.  Here are the pictures to tell the story.﻿﻿
﻿﻿﻿﻿﻿﻿﻿﻿﻿ 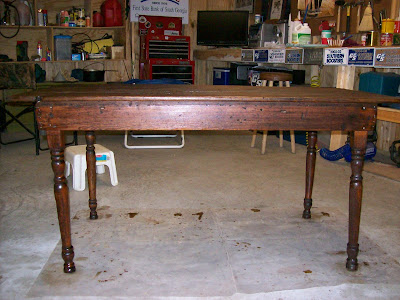 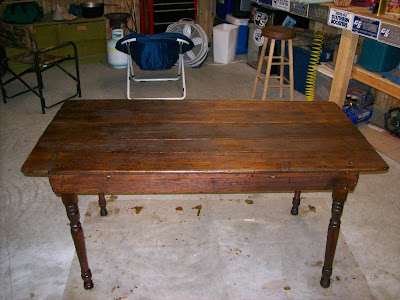 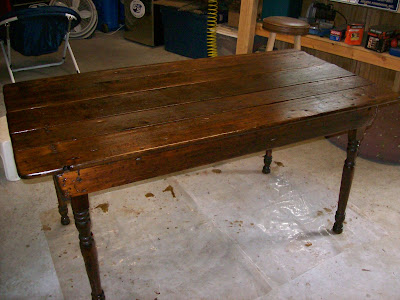 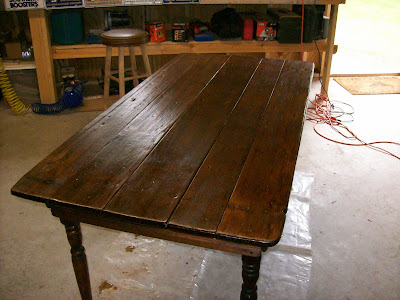 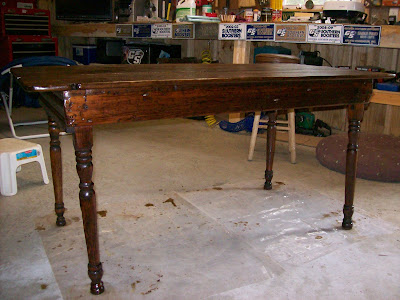 It was definitely not an easy project, but I did enjoy the challenges that it presented.  I hope Joe likes what he sees! 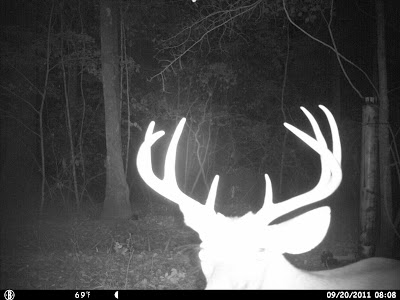 This guys seems to like my little area of the hunting club.  I have him on camera on an almost daily basis.  He is not big enough for me to shoot just yet, but I hope he hangs around and draws in some bigger bucks that just might think he is out to steal one of their girls.  We have several pictures of different bucks in this size range.  If all of these guys can make it until next year, then watch out!  We are going to be loaded with big bucks!!
Posted by Unknown at 12:10 PM 5 comments:

The weather finially broke here in South Georgia this weekend and that meant that Josey could enjoy some time in the Dove field with me.  She did really well for her first time out this year and I was very pleased with how well she did with her new "E" collar.  You can tell in the following video that she was "one happy dog" to be out chasing birds again!!  It is not the best video because I really didn't have the most time in the world.  I mean I was out there to try and get my limit!


Could you see that little tail going 90 to nothing??  It was that way all morning! 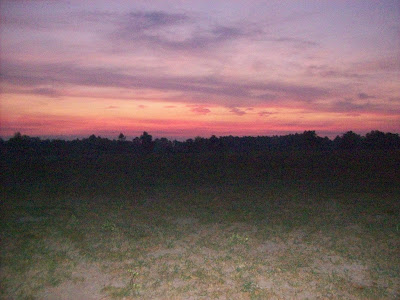 ....went Goose hunting!  Georgia has an early season for Canadian geese.  The Department of Wildlife shipped some of the geese into the state many years ago and they have thrived here in the South Georgia heat.  They have even become a nuisance to golf courses and athletic fields across the state because they like to feed in the nice plush grass.  To control numbers, they turned hunters loose on these birds from the north.  Given the fact that we have been sitting around all summer without shooting anything, you find some pretty itchy trigger fingers waiting on this day to arrive. 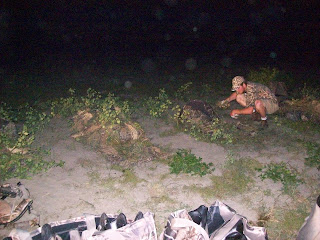 My cousins invited me to come along on this trip.  They sorted needed me to go because I knew the land owner and was able to obtain permission to hunt.  We got there well before daylight and started laying out our blinds and setting up decoys.  Some of the crew had gone ahead the day before and dug us some pits to place our layout blinds in.  I found out fairly quickly that this goose hunting takes a lot of work and a lot of equipment.  We were set up in the middle of a pasture on a hill that the geese had been spotted in the past two days.  The birds were roosting in a pond about 1/2 mile away.  As daylight broke we could hear the geese on the water starting their morning chatter.  Excitement was building among the group as we were waiting on the 200 or more birds to leave the lake and head for our spot as they had done the day before.  Even my cousin's award winning Lab was waiting with anticipation. 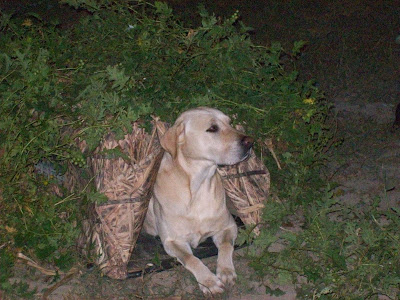 The birds got a little louder and we could tell that they were in the air.  The boys did some soft calling and a group of six made their way towards our set up.  We had placed the decoys in an arc to try and draw the birds to the middle of our set up, but this first group was lighting on the far right end.  My cousin Zack was the only one able to shoot and he brought down two geese before the others could get away.  We quickly gathered up dead birds and got back in our blinds.  We heard the rest of the birds leaving the water and started calling again.  Nothing was coming.  They headed in the other direction.

The group was a little dejected as all of the proper scouting had been done and all the preparations had been made, but they do call this hunting, not killing.  We sat there for a little while until Zack offered to go get the truck and see if he could find where the birds had gone.  He was gone for about 15 minutes before he called and said "Get ready".  He found them in a corn field about a mile away and got permission to walk through the field to try and ambush them.  We could hear the geese as they took flight and then we saw them on the horizon.  We started calling and a small group turned our way.  Before you knew it, there were 7 more geese on the dirt and our hunt was over.  It was a really good time and something that I can see myself doing again!  I had a ball!! 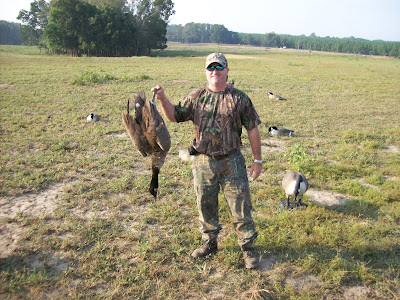 Now before all of you think that I have gone crazy and traded in goose hunting for dove hunting, think again.  Reid and I managed just fine that afternoon! 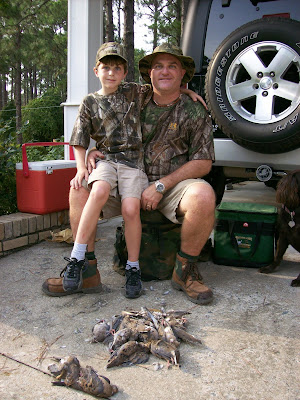 We didn't go to the field until late in the afternoon because of the heat, but the little Browning Gold did not disappoint as the limit was obtained in quick fashion!

The day came to a close with Georgia Southern pulling out an awesome win!  It was a great opening day!!  Hope yours was too!
Posted by Unknown at 11:46 AM 6 comments:

Work is Paying Off! 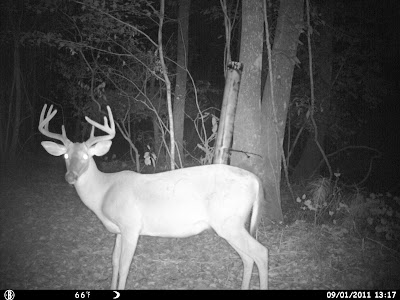 I retrieved the card from my camera this morning that I had set up in my "made over" stand location.  The camera has been there since Saturday and it took about 100 pictures.  I was pleased with what I saw and it will only get better as more deer find this new food source.  I have several pictures of this nice little 9 point.  He was the largest of the bucks that I got pictures of and a deer that we have not seen on any of our other cameras.  I look forward to seeing what else this new stand sight may bring. 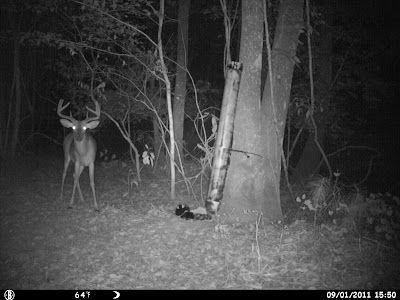