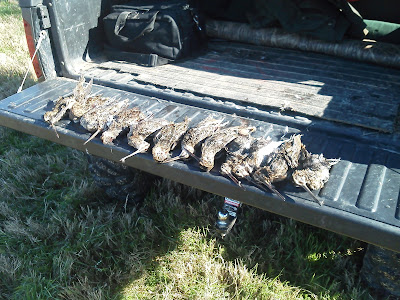 It was another beautiful weekend here in South Georgia, so the Snipe Hunting crew once again took to the low lands.  The birds were there waiting in abundance and we collected 13 before we decided to honor their white flag of surrender.  I have found the perfect wing shooting sport to get me through the time between dove season and turkey season!  Can't wait until next weekend!! 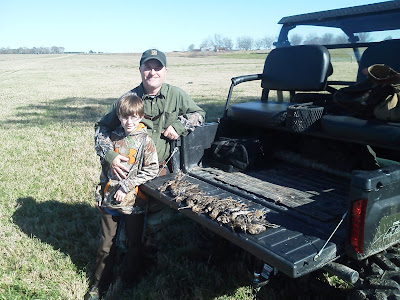 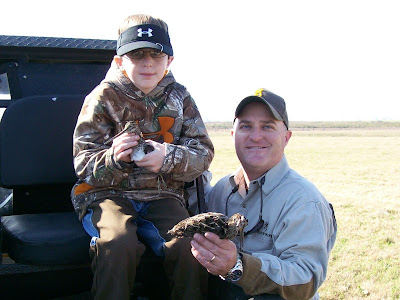 This past Saturday in South Georgia was a pretty one.  The day started out cold and clear, but the forecast called for warmer weather later in the day with plenty of sunshine.  What is a hunter to do?  No dove season, no duck season, no quail to chase, and a month before turkey season....???, why go Snipe Hunting of course!!

The Common Wilson Snipe is a not so popular game bird that lives around wet areas or small ponds here in South Georgia.  I have written about my previous love affair with chasing these bird here.  On a day like this, I decided it was well past time to share this sport with some good friends and our boys!  Besides, if we had them outside doing a little hunting, they wouldn't be inside playing video games!

I called up my good friend Hal and laid out a plan.  Hal owns about 40 acres of old pasture land that has a good sized creek flowing through the middle of the property.  Just North of his land is a larger pasture that belongs to one of Hal's family members that also has a creek and several natural wet areas.  Prime time Snipe habitat!  We got permission to hunt this property and decided to make a go of it.  We called up our third partner in crime, Steven and he brought his son.  All of our boys are the same age and get along well together.  We met up for lunch with a promise to the boys that we would do some hunting and shooting and riding the Rangers, but no I-pods, DS's, tablets, etc. would be allowed.  They agreed and off we went to make some memories!

We drove down to the property and surveyed the lay of the land.  We decided to walk the first small ditch that we came to.  We walked it out with not one bird spotted, however as we circled back to catch one last wet area that fingered off of the ditch a single jumped and passed in front of us.  As we shot to bring down the single, a group of birds left their cover and took to the sky.  Here is what is fun about snipe hunting!  As you walk along, birds will flush like a quail moving very fast, but if you miss on that opportunity just be patient.  They do not want to go far.  Most of the time they will circle back overhead and present you with another shot or allow you to watch them land in another area not far away.  This was the case with this group.  We watched the birds fly in a big circle and land about 300 yards away along the big creek.

We decided to split up and approach them from each side and maybe get up a few more birds along the way.  Hal took a Ranger and the boys to the other end of the creek so he could cross (the boys really liked that part, they got to go mud boggin' in the Ranger).  Steven and I stayed on this side of the creek and started walking.  It did not take long to find the group of birds and when the smoke cleared we picked up six.

We continued working the wet areas of the property and at the end of the afternoon we had managed to pick up 10 Snipe, three muddy boys and no video games!  After the hunt we let the boys shoot their guns at a few skeet.  We then cleaned our kill, thawed out some steaks and deer sausage and had ourselves a little feast.  The steaks were great, the sausage was fine and the snipe tasted as good as any dove that you can prepare.  It was a truly awesome day and one that I hope will be a good memory for us and the boys!