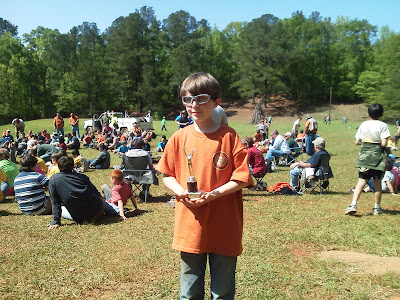 You see this picture?  This is a picture of a State Champion knot tying master!  Reid is the fastest Royal Ambassador bowline knot tier for the year 2013, an honor that he has worked hard on for the past three years.  He has finished second on two consecutive tries, but this year he brought home the gold!  What is even more remarkable is that he was able to accomplish this just hours after his father totally humiliated him in front of all of his friends and fellow campers.  Let's back up a bit.

The annual First Baptist RA camping trip to Camp Kaleo is always an exciting trip for all the boys.  We have been working on camping skills for weeks and we were prepared to meet all the challenges that would be given to us in all of the competitions.  We were not prepared however for heavy rains and 40 degree temps that the weatherman was calling for on Friday night.  We made the wise decision to leave the tents at home and stay inside one of the cabins offered for large groups.  Friday night was a wet one, but Saturday promised to be clear and cold.

We woke up Saturday morning to temps in the low 40's. The boys were ready to begin the competitions, so we headed out to the competition grounds.  The boys can compete in team knot tying, chariot races, BB gun shooting, archery, first aid, map and compass, wild wood runs, fire building, and a canoe race.  We started with the wild wood run and made our way over to the canoe racing area shortly after.  We have done well in this event in the past, bringing home three state titles thanks to my good friend Dr. Cook.  Reid and I finished 2nd in this event last year, so I only had one thing on my mind!  I wanted the crown!

The race is a timed event in which you paddle the canoe out to a buoy, make a turn around it and head back to shore.  As I watched my buddy Dr. Cook set a blistering pace just two spots in front of me, I knew that Reid and I would have to be fast.  I thought his turn was a little sloppy so I set my goal in making a tight turn and pushing extra hard back to shore to lower our time.  We would never quite get that far.  Reid and I settled into the boat and I gave him instructions to just worry about paddling on the right side.  I would handle the rest.  We kicked off and I gave a mighty two strokes on the left side rocketing the boat forward with enormous thrust!  As I switched to the right side to straighten our line of direction while maintaining our quick pace, I over guessed my own strength and enthusiasm and accidentally slid to the right side of the boat.  This was not good.  My next stroke was my own swimming motion towards my son to make sure that he was safe as we were both now taking a swim in 40 degree weather.

Reid was in a little panic, but I assured him that he was not going to drown because he was wearing a life jacket.  I calmly told him to swim to shore and that I would be right behind him.  I tried to gather the boat but quickly realized that the heavy coat, cargo pants and hunting jacket were starting to weigh me down to the point that this was not going to be an easy swim.  I ditched the boat and headed for dry land.  I reached the shore soon after Reid was being pulled from the water by the others in our group.

In case you are wondering, the water was warmer than the outside air. Being in the water was not bad at all.  Getting out was a B----!  Reid was not happy and he let me know it.  I got him calmed down and we made our way back to the cabins where I was able to put him in a hot shower.  After we were warmed up and had changed into dry clothes, I sat him down and had a life lesson kind of talk.  I told him that sometimes bad things happen, but that it was very important to remain calm in those kind of situations and to think clearly about how best to go about fixing the situation that you are in.  He seemed to understand, but I don't think I will get him back into a canoe anytime soon.

We made our way back to the competition fields to face the music.  His friends were actually very good to him and didn't make fun of the situation at all.  They were generally concerned for him.  My friends on the other hand, let me have it.  I now have a new nick-name... Trey Beauche, The Water Boy.

Reid rebounded well as he helped his knot tying team place second in the team tying event and placing first in the individual event.  He hasn't talked much about our little swim and he seems to almost have forgotten about it.  His Dad however has been reminded about it on a daily basis!

The Braves Have Been Here Before! 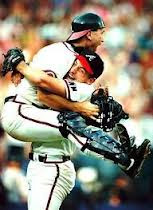 The Atlanta Braves are off to their best start in two decades.  Their weekend sweep of ESPN's favorite team, The Washington Nationals, has the baseball world turning their eyes towards Atlanta to see just how good this team can really be.  They play solid defense, they have excellent starting pitching, their bull-pen has not allowed an inherited runner to cross the plate in the first twelve games, and they hit the ball pretty well too.  After the first 12 games they lead the majors in home runs and run differential.  The scary thing is, I think they can be better.  Now I'm not sure if the pitching quality can keep up this pace, but the batting order can do some improving.  BJ Upton and Jason Heyward are hitting a combined .260 and Dan Uggla is still hitting less than .200.  Freddie Freeman has been on the DL and Brian McCann has yet to play a game.  These Braves have the potential to be lethal!

So who has been carrying the offensive load?  Justin Upton has returned to MVP form clubbing 7 homers in his first 12 games to lead the majors.  Chris Johnson has been rock solid playing 1st and 3rd base.  Our bench players are proving to be the best in baseball, and our current starting catcher has turned into the early season story for all of baseball.

Evan Gattis is a 26 year old rookie catcher that walked away from the game for four years in search for the meaning of life.  I'm not joking.  You can read the amazing story here.  What has he done so far this season?  He has played in 9 games, clubbed 4 homers, is hitting .333, has played good defense, has called 3 shut outs, and has the best nick-name on the team, El Oso Blanco, The White Bear!  Not too shabby for an ex janitor. 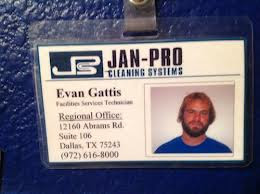 Watching Gattis play this year reminds me of another long shot catcher that found success with the Braves in the early 90's.  Greg Olson, who is shown in one of the most famous Braves photographs above, caught fire in 1990 after an off season of driving a Budweiser beer truck.  All he did was play great baseball  for the Braves and helped them go to the 1991 World Series.  The famous picture is from the pennant clinching victory on a game pitched by future Hall of Famer, John Smoltz.  Olson was injured in 1992 and released in 1993 to make way for the Braves future catcher Javy Lopez, but his contribution the the Braves organization will always be remembered.

Beer man?  Janitor??  What's the difference?  Let's play some ball!!  The problem the Braves are facing is what exactly to do with Gattis once Brian McCann comes back from shoulder surgery.  McCann is a six time All-star and 5 time Silver Slugger.  His is being paid $12 million this year.  Those guys do not sit the bench.  McCann is also in the last year of his contract and there was talk that the final days of his playing career may be better served in the AL as a DH (he is not know for his defensive skills).  Would the Braves listen to trade offers on McCann?  They may be willing to take that chance if Gattis continues to rake over the next couple of weeks.  We probably will not resign McCann anyway after this year due to his age and asking price, so the Braves officials have some pondering to do. 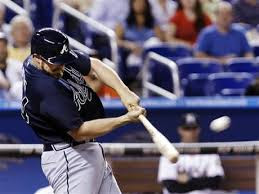 In the mean time I guess it is a good problem to have.  Too many bats are seldom seen as a bad thing and stories like Gattis bring good will to your ball club.  It has been a good ride so far in this young season and I plan on enjoying it for as long as it will last.  I feel fairly confident that the Braves cannot continue this pace.  I mean records of 149-13 just don't happen, but here's hoping for a great year and a chance to get back to the World Series!  I'll be watching my new favorite player... 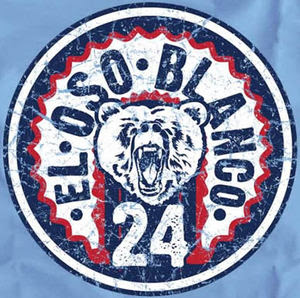