Off to a Good Start! 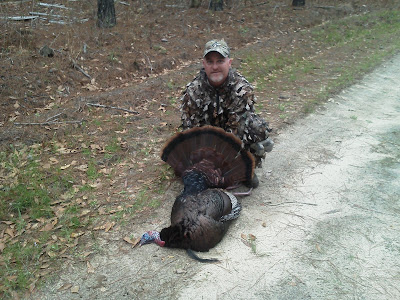 ﻿The 2013 Turkey season began with forecast of bad weather for South Georgia.  A series of storms were set to hit our state beginning on Friday and lasting through Sunday morning.  As the rains fell on Friday afternoon, my hopes of an opening day Thunder Chicken were slowly turning into some serious doubts.  Daddy and I spoke on the phone Friday night, and after watching the weather decided that we may just get a break for Saturday morning, so we made plans to hit the woods.

The morning was cold, cloudy and windy but no rain was falling as I made my first cup of coffee.  My hopes were being renewed as I gathered up my gear and loaded it into the truck.  We hashed out our plan of attack on the drive to the property and put that plan to order shortly before daylight.  We parked the golf cart in a central location and decided to allow the woods to wake up on it's own.  As the woods came to life a loan crow sounded off followed by an angry gobble fairly close to our location.  Getting to this gobbler was going to be a problem due to the access routes to where he was roosted.  We made an attempt to get a bit closer and set up on the road leading into his location.  As we started to softly call to the bird, the bottom came to life with the sounds of the real thing.  We didn't have to do anymore calling because we had several hens calling for us.  We knew we were doomed.

The Gobbler actually flew down in the other direction and took the hens with him.  We packed up and tried driving around to hear another bird, but we were not successful.  We decided to call it a day and go home to wait out the storms that were coming our way.

I was all ready to take an afternoon nap when the sun decided to try and peak through the clouds.  Bad weather was still in the forecast but it looked like we may get a small window of sunshine.  With clouds in the distance we struck out to try and get an afternoon bird.  We set up on "Death Hill", a place we have had great success in calling birds in the afternoon, and started some soft calling.  It didn't take long for our first birds to appear.  Here he is.....

This is Judas!  Well not the actual chicken that Daddy and I have named Judas, but he looks just like this.  Judas is a Burmese Jungle Fowl and is a part of Fitzgerald's history.  I have written before about how these chickens were released in the wild in this area as a game bird, but found their way into town and have been thriving for the past 30 years roaming the downtown streets.  Well Judas has somehow made his way to our hunting club.  We started catching pictures of him on our game cameras this past summer.  He was hanging out with a group of gobblers.  We felt that Judas's days were numbered, as these birds have never done well in the woods, but he made it through the fall and through deer season.  I guess it helps to have a bunch of turkeys around you to warn you of any danger.  We named him Judas because Judas likes to crow.  A lot!  Little did he know that his crowing would betray his new roost mates and give away their location to us opportunistic hunters.

Back to the story.....  As we were calling, Judas crowed.  Then we heard a gobble.  Another crow.  Another gobble.  Judas came running in to our set up looking around for his friends.  We were laughing.  He hung around a bit and decided he didn't like something, so he wondered off out of sight.  We called again and this gobble was much closer.  I caught sight of his white head as he made his way up from the creek bottom to check out our decoys.  He only had to walk about 15 yards to give me a good shot.  This took a few minutes because he was very cautious in his approach.  This was a young gobbler and I'm sure he was making sure that the "Boss Tom" was not around.  He took a few more steps and I let the Browning bark.  First Turkey of 2013 was down for the count.

I think I heard Judas cry! 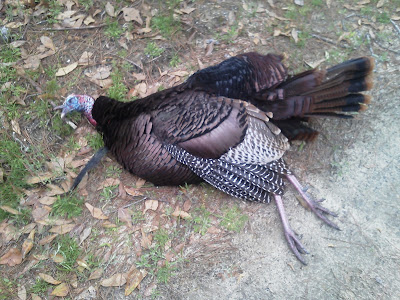 We are off to a good start!

What a way to start the season! Judas would make some mighty fine trout flies. ;)

Awesome! Congrats. I am hoping to get out for my first turkey hunt in May =)

Nice start! Keep up the good work. Hope to get on a few myself this spring. Our season usually doesn't kick off until mid April.

Yea! Congrats!! I am patiently waiting for our turkey season to start April 15

Awesome story Trey...congrats!...and funny on the chicken part, they are some cool looking birds too. Thanks for the 'like' over there brother, I really appreciate it...Dennis