It's Been a Great Season! 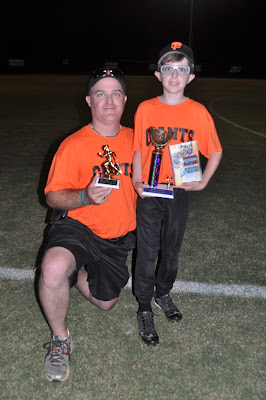 The 2013 9-10 year old Giants finished the season as league runner-up.  After making our way through the season ending tournament in the winners bracket, we had to face the mighty Phillies in the championship game, and what a game it was!  After spectacular defensive play by both teams, the score was tied after 6 innings at 1-1 and everyone was treated to free baseball!  4 more innings to be exact!  The final score was 2-1 in favor of the Phillies in 10!

We fought hard in the second game but came up a little short in a 13-9 effort.  Our kids never gave up against a team that was clearly the best team in the league.  The Giants finished the season with a 10-5 record.  Our record against the Phillies???.........1-4.  They sort of had our number along with every one else.  They finished the season with a record of 13-2!  Congrats to the Phillies!

Reid had a very solid year, especially in the field!  He is shown here holding his "Golden Glove" trophy that he earned by having the best defensive stats on our team.  We decided early in the season that we wanted to honor some of the kids that excelled on the team and we kept stats on everything from fielding to base running.  We gave a trophy for best defense, best offensive numbers, Team MVP (which was a combination of the two), and a coaches award for the kid that showed the best attitude towards his coaches and his team.  This was a great team to coach because it was full of some really great kids!  In fact, at the recent school honors night, 8 out of our 12 boys were honored in some way, with 6 of them being recognized for having all A's for every quarter for this school term.  Makes us coaches proud!

Reid is also shown holding a sports devotional book titled "Have Fun, Try Hard, and Play Fair".  We wanted to give the kids something that they could use to help them become better young men.  A trophy will eventually loose it's shine, but lessons about how to live a Christian life will last a lifetime!  The book has 365 daily devotions related to sports and how that relates to living your everyday life for God.  Several of the boys got emotional after the game and I have had several parents call me and say that they couldn't believe a group of coaches would care that much for their kid.  I'll be the first to admit that I did not want to coach a team this year, but this team was worth it in every way!

To Coach Hal and Coach Stan-  I'll coach with you guys anytime!  It's been a great ride!  We were lucky to get such a great group!! 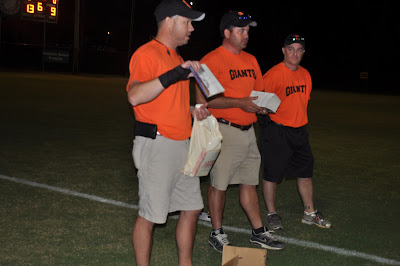 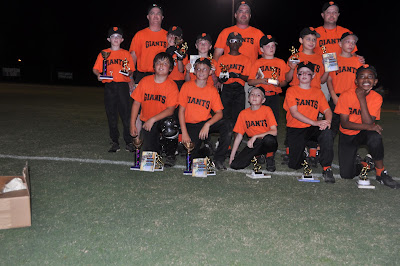 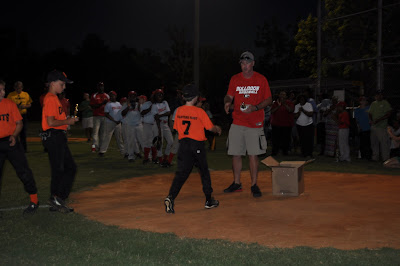 The season has not ended for Reid just yet!  It's on to All-Stars to see how our kids stack up against the best in the State!  Reid has made his first All-Star team and I am one proud father and Coach!  Let's go get 'em Son!!  Your Daddy is very proud of you and your hard work!!
Posted by Unknown at 11:36 AM

So proud of you both. You, Hal, & Stan are all outstanding coaches but more importantly great Christian roll models for the boys. The end-of-season team get-together that last night was a class act!

Great job teaching that there is more to life than a game. The game is the tool and you use baseball to teach life.

It doesn't hurt you are a Giant also.