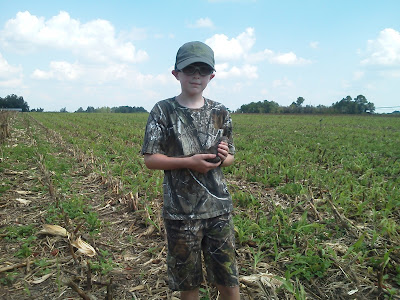 This past Saturday was the opening day of dove season and hopefully the re-opening of this blog. It has been a busy summer, but I have not really had many blog-worthy moments to share with all of you. Now that hunting season is here, I hope that I will have some stories from the field to encourage some page views in this dying publication. The first hunting story of this young season comes to you from a very proud Daddy!

My son Reid is shown above holding his very first dove kill. He shot this bird while it was flying with his youth model Remington 870 pump shotgun. I had been giving him one shell at a time so that he could try and shoot a bird off of the ground. The birds were coming pretty fast and I would not let him shoot. I didn't want him to get frustrated, so I was waiting on a super floater to better his chances. A bird flew over and I raised to shoot. I missed with the first shot and the bird circled hard right. I turned to fire my second shot and missed again. I kept turning and I felt my chair tip out from under me. As I was taking the blind and myself to the ground while trying to keep my shotgun pointing in a safe direction, I heard Reid's gun go off. I looked around in a slight panic to make sure he was alright as I heard him say "I got 'em!!" He put his gun down and ran to where the bird had fallen, picked him up and did a little victory dance! He was so proud of his first kill and so was I.

We went on to kill the limit and called it a very good day!!  What a great way start to what I hope is going to be a very good hunting season!

He is batting clean up for the old man...well done!