The anticipation has been building for weeks.  The young men that make up the First Baptist Church Royal Ambassadors (RA's) group have been looking forward to this night ever since the last race was run in 2011.  The annual RA Racer Pinewood Derby is a big event for our kids and their families.  It is our goal that every kid will enjoy this racing experience and show good sportsmanship.  It is also a special time for son and father to work together preparing the cars by shaping, sanding and painting these little works of art.

We have a large group of boys this year and more that a few of them have VERY competitive fathers.  Race shops have been opened all across Ben Hill County this year with the hopes of knocking off last years champ.  "The Beast" car was last year's Car of the Year and hails from the Cook Racing Team.  The Cook team proudly boast two Car of the Year trophies and the bulls eye has been placed squarely on their back.  Plots were laid thick and the Internet pinewood derby sites have received a record number of hits over the past month with the FBC crew looking for ways to make their car lightning quick.

Reid and I were entering our second year of competition.  Some of you may remember that our car was built for looks last year.  We went with a Georgia Southern Eagle design that proved to be nice looking and won two design trophies, but we were terrible on the tract.  Last years overall record....1 and 8.  I

was determined to try and improve on that record.  Reid and I discussed several different design ideas and we actually built three different cars. (I like to spend time in the shop keeping busy and it's kind of fun making these things)  He decided on the car that you see at the top of this post.  He named it the "Under Armour Car".  It is a low profile design that I copied off of one of the many pinewood web sites.  The weight for the car is loaded into the rear with cylinder weights.  The paint job is a black with gold and red over spray to give it a metallic look under the lights.  It was a fun car to build and Reid was really a very good helper every step of the way including sanding, painting and keeping me company while I ran the power tools.  I felt good about our design and all of the things we had done to the car.  It was time to race!

After the official weigh in, the cars were judged for artwork and also for best aerodynamic design.

We set up the brackets for the two races.  The Lads race in one heat, while the Crusaders race in another.  We determine a winner in both classes by having a double elimination style tournament.  We crown a first and second place winner in each heat.  We then bring all the cars together to race in one big event.  The winner of this double elimination event gets the opportunity to race against last year's Car of the Year.  If victory is obtained, then the new Car of the Year is displayed in a glass case in the RA room until next years race.  All the boys want their car in that box!

Reid drew a bye in the first round and had to watch several cars run before he got his first opportunity.  He beat what I considered to be a fast car, so I knew we had a chance to be pretty good.  You can see his first race here.  The Under Armour car is in lane #2, which is the lane closest to the camera.  We win this race with a late push on the straight away.


This race will give you a little better idea of just how fast Reid's car really was.  The car he defeats in this race won several races.  He wins this race by almost a full car length.  We are again in lane #2.

So we made it to the finals in the Lads division.  We were undefeated and going up against a car that we placed into the losers bracket just a few races earlier.  The other car would have to beat us twice to claim the prize.  This happens more than you think because some cars get faster the more that they race.  But today was Reid's day.  He blistered down the tract to claim victory and the Lad title was his!  A perfect 4 for 4.

Now the big race was up next.  We won our first two races with ease but drew a battle that Reid was not looking forward to in our third race.  We were going up against a legend.  A two time Car of the Year winner from Cook Racing was our next opponent and my little man was a bit nervous.  He didn't say much to me as I placed his car on the track.  He walked to the other end of the track with a look of dread on his face.  The look was quickly replaced with one of relief as The Under Armour continued its winning ways.  We went on the the final round.  Again, we would have to be defeated twice.  It didn't happen as we won the race going away.  Reid earned the right to race "The Beast" and a chance to become the next Car of the Year!

I think he was sweating he was so nervous.  I have to admit that I had some butterflies as well, but I knew that history was on our side.  There has never been a repeat Car of the Year winner.  This is probably due to the fact that the car hasn't been run in a year and that the other cars going against it are running at full warmed up speed.  The boys are hushed as "The Beast" is pulled from its perch in the glass box.  The legend is placed on the track in the lane next to the new comer.  It's "The Beast" versus "The Under Armour" for all the marbles! 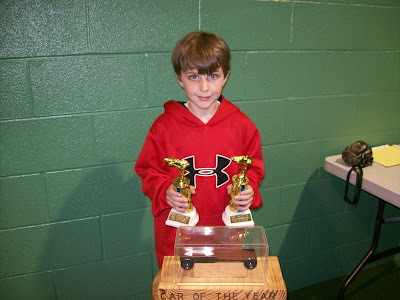 We smoked 'em!  The Under Armour PROTECTED THIS HOUSE!  Reid finished a perfect 9 for 9 in the 2012 FBC RA derby race!  I was one proud Daddy and words cannot express how I felt when I put my son to bed last night and he hugged me and said "Thanks for building my car Daddy, you're the best!" 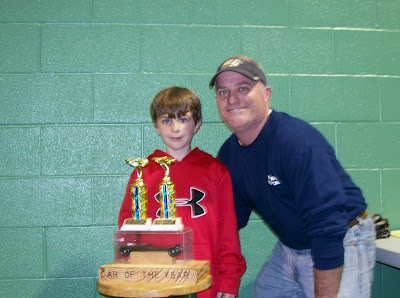 That was the only trophy I needed!!
Posted by Unknown at 10:40 AM

Great job from both of you.You made a PaPa very proud also,

So sweet! Reading the end brought tears to my eyes! What a special memory. Go Reid!!!!! (and daddy too!)

I think I jumped a foot when he won! I was so proud of all the boys and the good sportsmanship they all exhibited. Watching them high five, slap each other on the back, and clap for each other just warmed my heart. Just remember though that the best reward in all this is that sons and their daddies (hopefully) spent time together.

Congrats Reid and Trey, loved the video... it made the post...

That takes me back when my boy was in cub scouts

Great work! 9-0? I think you might think about retiring as it will never get better.

Steve, Can't retire just yet. I have 4 more years and the pressure has already been applied by my son. He wants to win it again next year!! Already working on new designs!

Congrats to both of you, that is really awesome!!...and what a pic of the two of you with the trophies....priceless!!!!