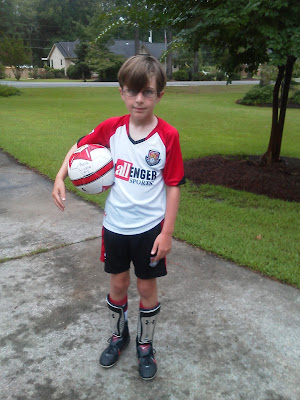 Growing up in South Georgia did not give me an opportunity to play the game of soccer.  The only thing a soccer ball was used for was to maybe play a game of kick ball.  We played a few games when I got into high school in order to meet certain PE requirements sent down from a governing body somewhere, but that was about it.

It wasn't until I got to college that I was really introduced to the game.  My fraternity brothers were players, and I mean real good players.  Most of the guys were from Atlanta where soccer had been popular for quite some time.  Our fraternity won the Georgia Southern Intramural Championship 3 times while I was in school.  I got to see some good soccer and learned how the game was played.

Fast forward to today and soccer has spread everywhere.  We even have it here in South Georgia where football is king, but soccer is growing.  My son is a soccer kid.  He has been playing since he was 5 years old.  He loves it.  In fact, as much as it pains me to say this, he likes it better than baseball or any other sport.  He's pretty good too!  He just finished soccer camp this week and his team won the World Cup tournament and Reid finished with the most MVP awards in his group.  I'm actually looking forward to soccer season so we can see how well he does against older competition.  He will be playing as a 9 year old this fall in a league that has ages 9-12.  Let's get 'em!

Thanks to Challenger Sports for providing us with excellent coaches and for conducting a great camp here in Fitzgerald.  These kids have learned a lot this week that this Dad/Coach could never have taught them.  Here's hoping that Reid will take his love for this game and develop it into something that he can play at a high level for years to come.

Yay Reid! I know he had a great time doing what he loves! Isn't it fun to see them grow with a love for sports! Give him a hug for us!!

Way to go, Reid:) We are SO proud of you. Just always remember to do your best and enjoy the game.