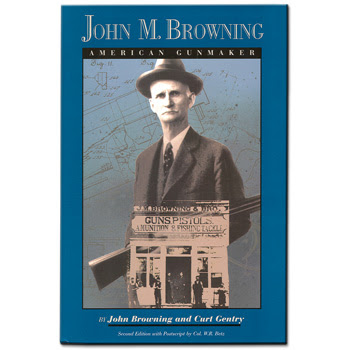 Besides family tradition, this book is the reason that I choose to shoot Browning guns.  If you take the time to read this great piece of American history, you may just learn some extraordinary facts about the guns that are still manufactured today by countless manufactures using the same principles that John M Browning designed over 100 years ago in a small shop in Utah.  What this man was able to accomplish in his life is nothing short of remarkable.  In fact his story and impact on the history of this country is such an interesting read that I pull this book out at the start of every hunting season to remind myself how thankful I am that John M Browning loved to design guns!

Browning got his start by working in his fathers gunsmith shop as a young boy.  He would take orders for his father and by the time he was 8 years old he could repair most guns that were brought into the shop.  He loved his tools and to work with his hands but often found himself wondering if he could make a better gun than those he was repairing.  Indeed he could!  As a young man he designed a single shot rifle that was very simple in its design yet very handsome and rugged.  He opened a gun shop with his brothers and starting manufacturing the rifle.  It wasn't long before Winchester got hold of the rifle and came calling on its inventor.  To make a long story short, John Browning starting designing guns for Winchester and did so for years.  Every gun sold by Winchester in the late 1800's was a John Browning design.

Now that John did not have to manufacture guns (or worry about money any more), he could work on inventing them.  Boy did he do that!  John Browning has invented a book full of guns including the first repeating rifle, the first repeating shotgun, the first machine gun, the first airplane cannon, the Colt automatic pistol, and the first over and under shotgun just to name a few.  He sold his designs to companies such as Winchester, Colt, and Remington.  These same companies still manufacture guns to this day using designs sold to them by John Browning who died in 1926.

Why do I shoot a Browning?  Mainly because my Daddy does, but if you read this book, you just might give Browning another look.  I just consider it going to the source.  If he designed all of the guns that we are still using today, then why wouldn't I want to shoot the gun with his name on it?
Posted by Unknown at 8:23 AM

Thanks for the lead Trey...I'm going to look for the book next time I'm on Amazon.